You Be the Somebody, You Do the Something: Huckabee Republicans

Before the 2008 presidential race I did not pay close attention to the selection process of either party's eventual nominee. I always voted in the general election, but not the primaries. That all changed when Mike Huckabee caught my eye during the GOP debates. He was a breath of fresh air standing by his convictions and not worrying about political correctness. While he did not end up as the Republican nominee, he did bring into the party a whole new batch of grassroots volunteers dedicated to making a difference.
One key phrase that Mike Huckabee championed was "You be the Somebody, You do the Something." Huckabee supporters took those words to heart and got actively involved in politics. For many this was their first foray into the political arena. These supporters that are called HucksArmy made Get Out The Vote phone calls, worked on local campaigns, petitioned their congressmen, went to rallies, and even decided to run for office themselves.

While Mike Huckabee decided against running in the 2012 election, he is still making a difference by standing up for the principles that he ran on in 2008. He has used his Huckabee Show to fight against Obamacare, bloated government spending, bailouts, and failed foreign policy that has hindered our standing in the world. He has worked hard to Repeal Obamacare by participating in the Repeal Healthcare Act campaign. In July Mike Huckabee went before the House Ways & Means Committee in support of the FairTax.  And of course, he continues to promote and further the ProLife cause.
Huck supporters are certainly disappointed that Mike Huckabee is not running this time around. But he is not sitting idly by, nor should we. As a Huckabee Republican, We Can Make a Difference. Find the issue that is near and dear to your heart. Volunteer at an organization that is championing your cause.  Contact your congressperson and let them know where you stand on the issues. Donate to a cause that needs funding. Run for office and be the needed change at the local level.
The race for 2012 will not include Mike Huckabee. But you can still Be the Somebody Who Does the Something. 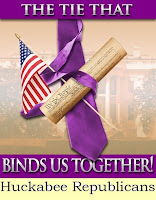 Posted by TexasConservative at 6:11 AM

Email ThisBlogThis!Share to TwitterShare to FacebookShare to Pinterest
Labels: 2008, 2012, GOP, Huckabee Republican, Mike Huckabee, Purple Tie, You Be the Somebody, You do the Something