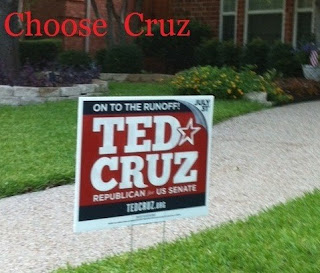 What was Mike Huckabee thinking when he endorsed David Dewhurst for Texas Senate? When you look across the country at the recent additions to the Senate and the House, you see bold freshmen who have a history and philosophy of fiscal restraint, limited government, and protecting the Constitution. You do not see a lot of 3 term Lt. Governors with a history of blocking conservative bills, being endorsed to go to Washington DC. Perhaps the Dewhurst endorsement was due to a longtime friendship.

As someone who has a lot of respect for Mike Huckabee and made thousands of phone calls for Huckabee for President in 2008 and for some HuckPAC candidates, I have not always agreed with who Huckabee endorses. Take Donald Young in Alaska, Andre Bauer in South Carolina and now David Dewhurst in Texas. Mike Huckabee was against candidates who could bankroll their own campaigns and instead felt that campaigns should be funded by people who trusted in the candidate. Then why not choose Cruz? Ted Cruz has an enormous level of grassroots support: 48,000 donations under $250 compared to Dewhurst's 4,000. Independently wealthy David Dewhurst has donated $11 million dollars to his own campaign. Ted Cruz has donated $800,000.  I was one of those grassroots supporters who donated under $250 hoping to make a difference. Thousands like me were successful in helping Ted Cruz, who has now raised more money than Dewhurst. All of these numbers add up to show that Huckabee miscalculated and backed the wrong guy.

In the 2008 GOP Presidential race, Mike Huckabee championed the FairTax, but in our Texas Senate race, Huckabee endorsed Dewhurst who does NOT support the FairTax. Huckabee's belief in the FairTax should have led him to endorse Cruz who stated that he will co-sponsor the FairTax. In a 2011 blogger conference call that I participated in, Huckabee talked about building support for the FairTax by taking the concept directly to the people who would in turn create a groundswell of support and ask their representatives to bring forth a FairTax bill. How can that be achieved with Dewhurst who was head of the Texas Senate? He never discussed the FairTax with the voters nor did he encourage it to be brought to the senate floor.  Last year Huckabee went before the House Ways and Means Committee stating: "we must work together to elect another record number of candidates to Congress (House and Senate) next year who support the Fair Tax or who are willing to learn more about it and a Republican President who will sign this legislation." Looks like Huckabee forgot about his FairTax call to arms. Texas already has supporters who co-sponsored FairTax Bill H.R.25: Senator John Cornyn and Texas House members: John Carter, Michael Conaway, John Culberson, Blake Farenthood, Michael McCaul, Randy Neugebauer, Pete Olson, Ted Poe, and Mac Thornberry. Ted Cruz as a Senator, would be standing alongside these FairTax fighters. Dewhurst would not.

Mike Huckabee is a religious guy who believes America was founded on Judeo-Christian values. Those values and our rights to Freedom of Religion have been trampled on by a secular society who wants to remove God from the public square. The atheists will continue to wage war on those who hold biblical beliefs; we need a fighter in the US Senate who has a proven track record of winning to counter these atheist attacks. Ted Cruz successfully took up the cause of over 3 million Veterans in defending their right to honor those who had fallen in combat with the Mojave Desert Veterans Memorial which is in the shape of a Cross. Ted Cruz successfully defended the words “under God” in the Texas Pledge of Allegiance, and effectively defended the constitutionality of the Texas Ten Commandments monument. With those successes, we need Ted Cruz to fight for our Religious Liberty.

In 2008, Mike Huckabee got slack from conservatives for his approach to illegal immigration. While Huckabee is a strong supporter of border security and Legal immigration, he was honest with voters about how we should treat children of illegals and even illegals themselves, stating that they should not be made to feel like they have to hide in the shadows. With Huckabee’s courage to stand by his convictions, why would he support David Dewhurst who supports amnesty and recently scrubbed a 2007 speech he gave from his official Lt. Governor website?  Ted Cruz, on the other hand, is against amnesty, has fought to strengthen and secure our borders, and championed efforts to enforce laws punishing illegal felons. Seems like Huckabee would like Ted Cruz's honest, forthright approach instead .

Ted Cruz is a fresh voice that voters can trust to stand up for Liberty, defend the Constitution, support the FairTax and work to reform and enact a Legal immigration program. Ted Cruz is a solid, conservative who stands by his convictions despite the costs, and will not compromise once inside Washington.

So once again, I am putting on my campaign volunteer hat and helping elect a candidate that will make for a better America. I hope you will vote for Ted Cruz in the July 31st run-off. Wish Huckabee would admit he backed the wrong candidate, and get on the Cruz bandwagon.


Visit TedCruz.org or click to learn more about Ted Cruz's position on these issues:
Pro-Life
Pro-Traditional Marriage
For 2nd Amendment Rights
Against Obamacare
For a Balanced Budget Amendment
Posted by TexasConservative at 10:27 PM